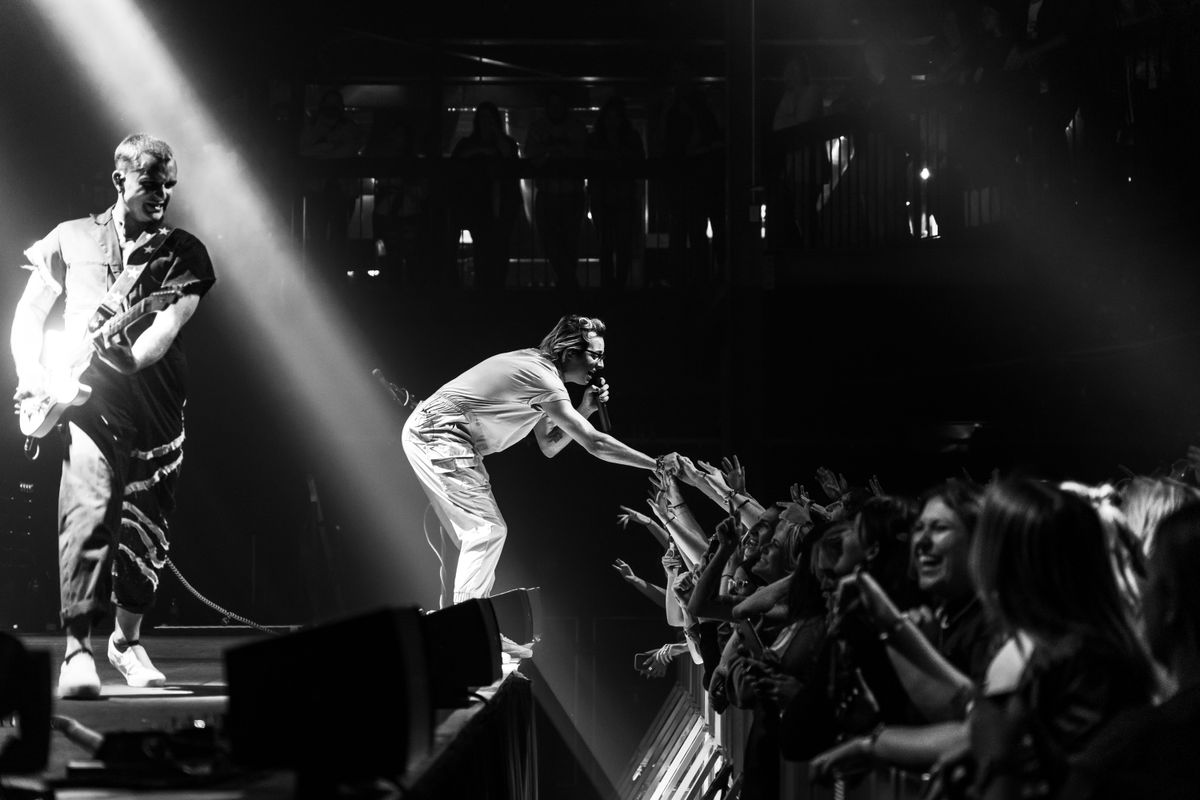 My time at Soundstage in downtown Baltimore has been well-documented, but this past Halloweekend marked my first trip to the sister venue, right around the corner, Rams Head Live. This place is cool, of all the venues I’ve been in, none of them are setup quite as well as Rams Head; through an intimate floor space, to the two levels of balconies, the sightlines are pristine and not once did I feel “away” from the action on stage. In my first go round’, it was all treat and no trick, as indie rock stars The Wrecks returned to Baltimore for part dos of their nationwide trek; joining on this leg are rising stars, Arlie, who though I hadn’t a clue about before, may have thrust themselves to the front of the pack, as far as indie risers go.

As the place packed out with teens and twenty-somethings, clad in Halloween costumes of every variety, first act, Arlie took the stage to show us all what a real costume looked like. The quintet took the lid off the crowd as they strode on dressed as iconic characters from The Wizard of Oz; with the eponymous Arlie, rocking quite possibly the best version of Dorothy I’ve seen (the quintessential red slippers swapped for a screaming pair of lipstick rid boots). This dude is a beast on stage, energy reminiscent of legends like Angus Young, there’s a barely controlled element of chaos that permeates from his every move, and it’s clear that each of his bandmates both add to and feed from the madness.

Unlikely as it may be, the Tinman, Cowardly Lion, Scarecrow, Wicked Witch of the West, and Dorothy her(him)self, may be the band I didn’t know I needed. Stage energy aside, Arlie and the Oclate Factory know how to play, and the music remains the main attraction. In parts sunny, others ethereal, Arlie rides the line between indie pop and rock in an intriguingly familiar (early the 1975 vibes are amazing), yet uniquely inspired manner. This is a band I certainly wouldn’t mind seeing live over and over again; I know they’ve only scratched the surface of their powers. So if you’re reading this, come back to Baltimore soon!

A few months back I was scrolling through Instagram and came across a post from some old college buddies; they were all posed at some concert with this singer, talking about some band called The Wrecks. That was the first time I’d ever heard of these guys, and I’m grateful for such. Just a few short months later, the indie quartet returned to Baltimore, and this time, I did not miss it. What a bleeping show these dudes played! The joy, the love, the music, just dripping from their pores; start to finish they left every bit of energy on the stage. In what was without a doubt the narrowest photo pit I’ve ever had the pleasure of stepping into (don’t know how I’m only just mentioning this.) it was like running an obstacle course, trying to catch these guys moving; Stepping, hopping, squeezing, and bending my way through the first 3 songs.

This is a fun band to catch live; whether flying and jump kicking around the stage or stepping over the pit and into the crowd, these fellas make use of every second; and matching their energy, the crowd jumped and sung along the whole night through.  There was a brief moment, while talking to the audience in between songs, where singer, Nick Anderson exclaimed about the day The Wrecks would be headlining arenas; these dudes are clearly thinking big, and with the show they put on, the music they’re making, and the following they’re building, I see no reason to doubt they’re capable of just that, and who knows how much more.