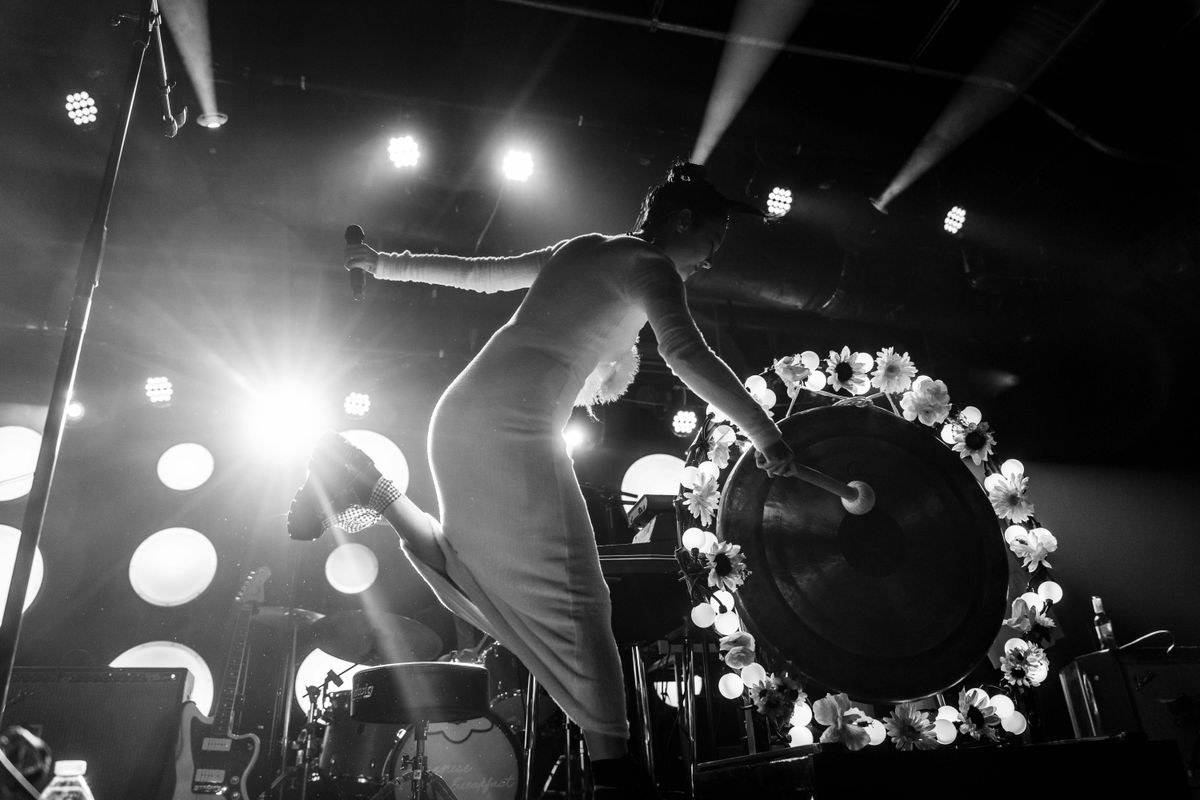 Japanese Breakfast Brings A Charm Of Their Own To Baltimore Stop

I’ve been to a few shows at Soundstage now, some pretty good ones in fact; but when I say I’ve never seen that place like this, I mean it. On what will be a Friday night I’m likely to remember for years to come [for various reasons] I witnessed Japanese Breakfast sell out and shut down Baltimore Soundstage in a way I’m certain I won’t see again for some time.

I’m not going to sit here and tell you that I’m Japanese Breakfast’s biggest fan. In truth, I only discovered they existed a few months ago; I was looking at guitar videos on YouTube, cause like most successful people [obviously], I procrastinate to no end; anyhow, it was there that I happened upon a Fender sessions video, with none other than Japanese Breakfast performing [and Michelle Zauner playing the most beautiful Silverburst Meteora *audibly sighs*]. Their sound caught me immediately. I don’t know that anyone blends melancholy and bubbly indie optimism quite the way Jbrekkie does; and once I heard [Zauner’s] solo in “Posing For Cars”, that’s all she wrote.

Before I could get that live treatment, the first act of the night took the stage. This was the first I heard of Trace Mountains. Not only do these guys have some pretty good music, but they also feel like real people. This is not to say other musicians aren’t real people; their vibe just feels so… normal? These are the kind of guys you can imagine just knocking a few back and hanging out with; it just so happens they’re in a successful band. I guess the better word would be personable, relatable even. Regardless, these dudes played a good show; light, funny and thumping throughout. For all the excitement and glitz of a big loud show, there’s just something about good music and a relaxing vibe that can’t be beat. For this reason I have only praise for Trace Mountains; whether it’s your genre or not, a good vibe is a good vibe.

Now, when it came time for Japanese Breakfast to hit the stage, the place went quickly from buzzing to full-on sold-out masterclass. By time I left the photo pit, there was quite literally no place to go. It took me a solid 10 minutes to work my way through the crowd, for a venue that is not exactly large. Regardless, I can say without a doubt it was worth it; the people just couldn’t get enough. One by one as the needle dropped for any given song, there was thunderous approval. No matter what track, it felt like “this is somebody’s song”; the one they blast in the shower and the car stereo, the one they hum when their doing the dishes, the one that reminds them of a moment too precious for words that aren’t being sung to a rhythm. Being surrounded by that kind of genuine joy and emotion is something I’ll never take for granted. It’s a big reason I love doing this so much. It’s in these spaces that you get to see and feel the kind of magic we all deep down dream of.

As for the performance itself, I thoroughly enjoyed it. The “Posing For Cars” solo absolutely surpassed my expectations; the real live thing… I’m getting winded just thinking about it. Michelle Zauner is one hell of a songwriter, but her guitar skills are seriously underrated. I hope I get to see these guys live again, the way their music translates just feels different, I like it. If you haven’t for some reason, give them a go, I’m sure you won’t regret it.

Be sure to check out the full gallery of moments below!