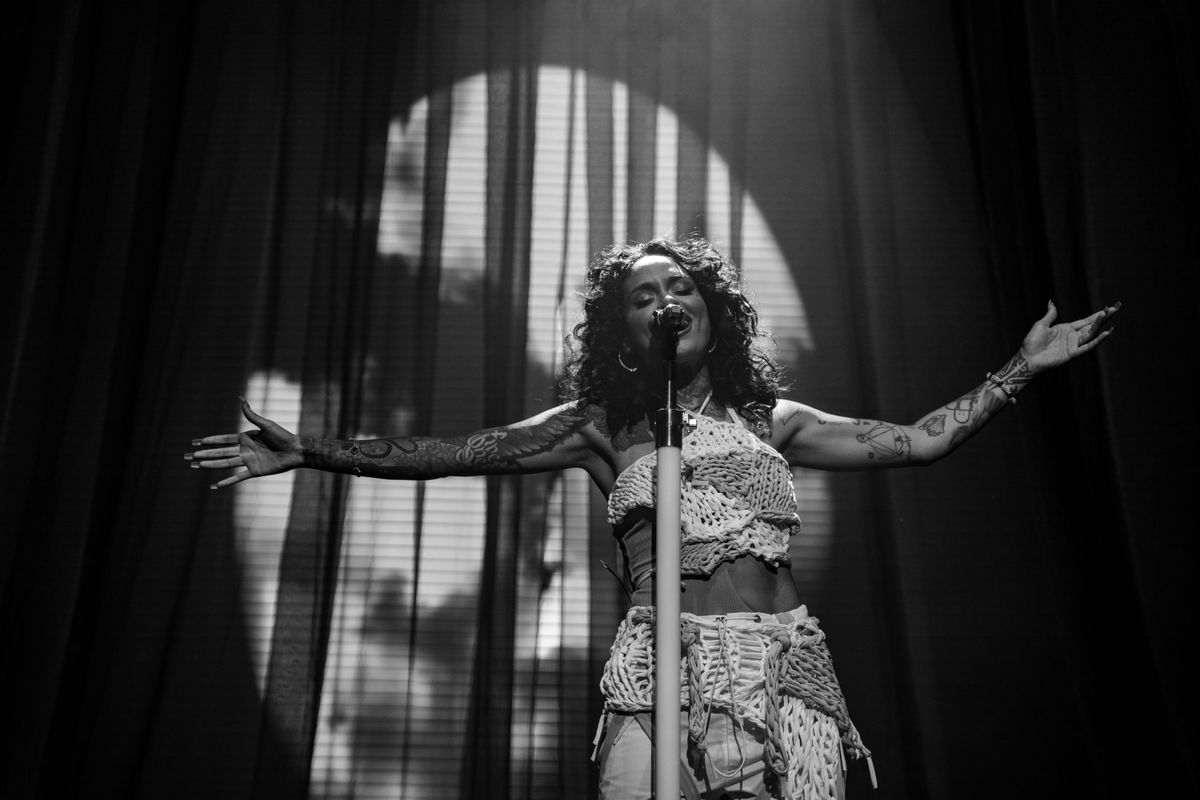 An Unforgettable Night on the Blue Water Road Trip

This past Sunday night, R&B superstar Kehlani brought their Blue Water Road Trip tour to DC for what was without a doubt one of the wildest concert experiences of my life. Performing for a completely sold-out crowd, 6000-strong, [Kehlani] along with openers Destin Conrad and Rico Nasty shut down The Anthem like I’ve never seen before. This was also, by far the hottest photo pit I’ve ever had the pleasure of being in; By time the end of the night came, I was covered in sweat and weak at the knees, a sentiment I’m sure much of the crowd shared. Added a slough of passed out concertgoers and even a surprise balcony engagement, I think a lot of people will be remembering this night for a long time.

Thanks to the travesty that is DC traffic, I entered The Anthem to an already performing Destin Conrad. It isn’t unusual to have much of the crowd still working their way into the venue through the opening sets, but the place was damn near full only a few songs into [Conrad’s] set. This was my second time getting to see Destin perform live, and though just a mere two months has passed in that time, it’s more than apparent that the young singer is quickly assimilating to life on stage. I can’t say I’m surprised, having now been tour opener for two of the most beloved R&B stars we have today in Syd and [now] Kehlani; however, seeing those steps taken in real-time is pretty cool, and if nothing else, is a clear indicator of the promise and talent Conrad exudes. Somewhere between “IN THE AIR” (my favorite Destin Conrad song thus far) and “UNPREDICATABLE”, we got our first fainting of the night. Stopping his set to ensure the fan’s safety and encourage us all to drink a little more water, we had no clue this was just the start.

I may be showing my age here, but growing up, one of my favorite things to do was watch old Michael Jackson live concerts on VHS. Yes, VHS; I am a child of the 90s, do not @ me. Now to my point, anyone who has ever seen one of these performances, whether through a VCR set, a YouTube video, or even [lucky bastards] live in-person, knows just how crazy an MJ show could get. The one thing that has always stuck in my mind regarding these old videos is the way people would just straight up pass out during shows; it was the norm and often times bordered on expectation; the question wasn’t if it would happen, but when, and how many. While I won’t compare this lot of contemporary performers to the legend himself, I can say with complete honesty that this show is the closest I’ve ever come to that kind of pandemonium. Where heat, liquor, and dehydration meet sheer and unfiltered exhilaration, results may vary.

The temperature continued to rise as the lights went down for Rico Nasty; fan after fan funneling in, bringing with an unquenched haze of dead summer heat. This, however, did not stop the crowd from going apeshit for the 25-year-old punk rapstar. It’s one thing to bring that high energy in the recording booth but translating that to live performance isn’t always so straightforward; Rico Nasty, as I now know, does not have this problem. The way she sounds in her songs is exactly the way she is on stage; brash, unique, and at-all-times entertaining. Even through not one, now two, but three show stoppings, due to fainting fans, the DMV product kept the energy poppin’: working every inch of the stage and tearing through hits like: “Smack A Bitch”, “Blow Me”, “Black Punk” and “Tia Tamera”, her signature sugar-trap style was there in full force. From the fainting onslaught to a mid-set wardrobe/make-up touch-up, and [Nasty] quite literally receiving her flowers from a kind fan (If anyone has a photo of me handing her the bouquet, I need that), Rico Nasty gave the hometown crowd an impressively memorable show.

As Rico wrapped up her set and once again implored the people to stay hydrated, venue staff and security rushed to hand out cups of water to the crowd, being at this point, at least 5 faintings deep. It was pretty cool, watching people pass back cups to each other and making sure the ones that needed help got it; even in such a chaotic and adrenaline-strung environment, true moments of kindness shouldn’t go unnoticed. It’s also worth noting that though every fanbase and every show is different, more than any other show I’ve been to, I felt a genuine since of camaraderie amongst the crowd; it was more than refreshing. Speaking of the crowd there were people EVERYWHERE: every seat was filled, balconies and staircases lined from end to end, walls and columns holding up those too deep into the night to stand alone; and even still, people continued to pour into a space I didn’t know could get any fuller.

Many of us were running on fumes [and other things…] as time came for Kehlani to take the stage, but our dedication stood unwavering. Though I don’t want to seem sensationalist, watching Kehlani glide onto the stage and step up to the mic-stand, was one of the most adrenaline filled moments I’ve experienced at a concert; I guess it helped that 6000+ people stood screaming behind me, but hey, if you got the flowers, give em. Nevertheless, once the needle dropped, the sultry superstar proceeded to give us all that we’d come for and more. Playing to every era of the catalog, from Cloud 19 and You Should Be Here (my forever favorite) to While We Wait and the present’s Blue Water Road, not one hit was missed. Added the smooth af choreography and heart-melting glances, I don't know what more we could've asked for.

On top of the flawless setlist, Kehlani’s performance provided the perfect backdrop for a life-changing moment, with one lucky fan dropping down to one knee and popping the big question; having caught wind of the proposal, Kehlani sent our collective hearts through the roof as they screamed “she said yes!”, showering the newly engaged couple with congratulations and even offering them tickets to another show, so they could ditch this one to really celebrate [*wink-wink*]. Aside from this special moment, Kehlani made sure to let every fan in attendance know just how much their support has meant to them, dropping to their knees and thanking everyone sincerely from the bottom of their heart.

As the show came to a close, and a sea of fans flooded the sidewalks outside, the spirit of our time remained, setting the sticky DC night air abuzz well past the midnight hour. These are the experiences that keep me moving forward, that remind me what being alive is supposed to feel like; the high is simply unmatched, and the next show around the corner can’t come quick enough.

Chekout the full gallery of moments below!