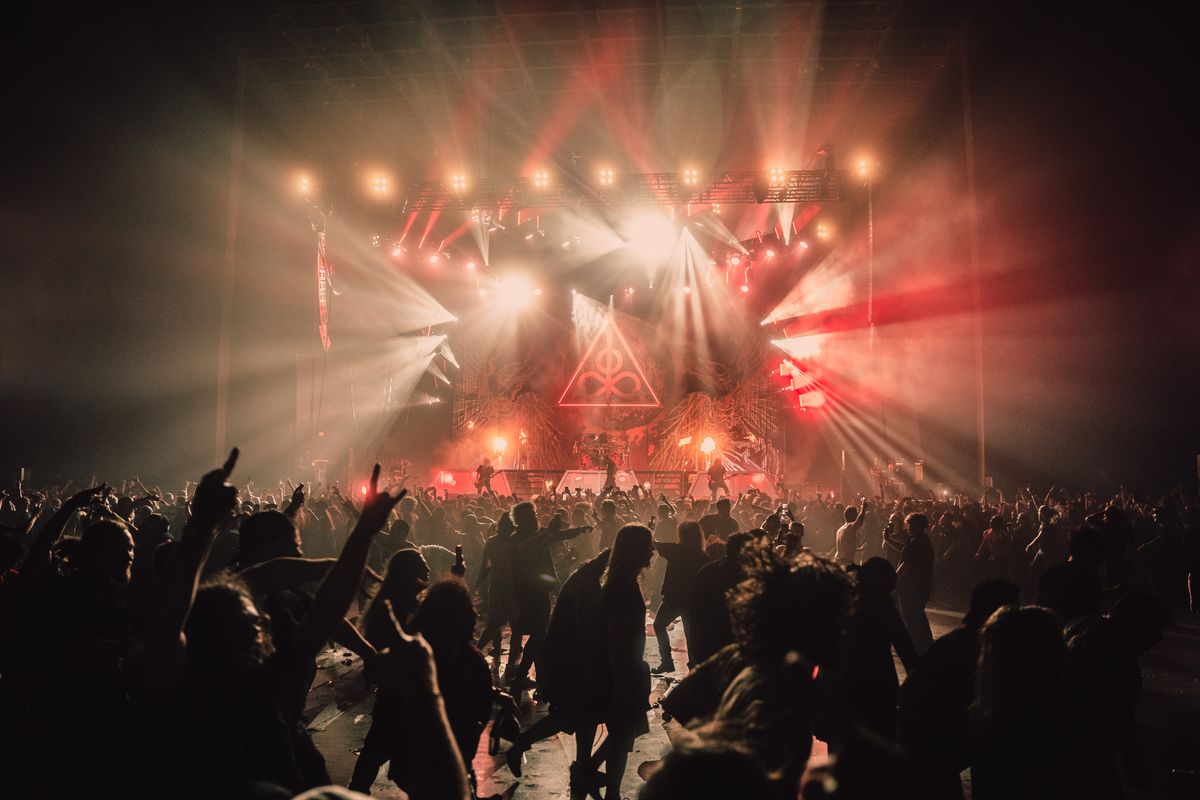 Lamb Of God’s massive Omens tour comes to a pyrotechnic finale in Dallas that all are sure to remember.

Celebrating the release of their 9th album Omens, Lamb Of God launch a massive tour starting September 9th and spanning all the way to a dramatic, fiery finale in Dallas all attendees are sure to remember. Over the span of the tour many supporting acts have rotated in but direct support of Killswitch Engage stayed throughout. On the final leg we were treated to support from the metal ripping Fit For An Autopsy & the instrumental masters Animals As Leaders.

Toyota Music Factory quickly filled with anxious fans as the doors opened the air was primed with excitement. Capitalizing on the excitement Fit For An Autopsy took the stage and ripped their most popular track “The Sea of Tragic Beasts”. The band smashed a setlist of six songs with an unmatched energy rarely seen from openers. The crowd showed their love for this energy by sending bodies over the barricade and headbanging the whole way through the set. This groups metal fury proved to be a perfect compliment to the finale of the tour.

Next up on the bill Animals As Leaders. The trio welcomed the crowd in with to the tune of “Arithmophobia”. The instrumental geniuses had the crowd awe struck. Words were not needed – just pure appreciation of their skill level with each instrument. Lead guitarist Tosin Abasi tapped his 8-string guitar to incredible precision while Javier Reyes provided impressive fills on backup as well as swapping to bass. Matt Garstka is widely regarded as one of the best, if not the best drummer the scene has to offer right now. Having witnessed him play “Micro-Aggressions” live I can confirm that to be true. These three are masters of technical skill and performed amazingly.

Up next – Killswitch Engage. While I had not seen this band live, I had high expectations for such a legendary group. I was not let down as the group wasted no time ripping right into “Strength of the Mind”.  Jesse Leach’s iconic vocals immediately had the crowd singing along. As smoke pillowed out from the stage the band played at a breakneck pace only stopping for guitarist Adam Dutkiewicz to let the crowd know he had seen better moshing from a children’s party. Adam was a character the whole set, pointing at people and making silly faces all while sporting his “I’m with stupid” shirt. The crowd took the jeering personal and started to give it their all sending bodies toward the barricade. Their reward was Killswitch playing “My Curse” which admittedly is my favorite and an awesome experience live. Dallas was even treated to the “Holy Diver” Dio cover which was so fun live. For 15 straight tracks Killswitch Engage gave it their all and Dallas loved every second.

The time of the night had come for Lamb Of God.  A giant curtain covered the stage setup from everyone as the lights went low.  The chilling intro to “Memento Mori” rang out over the speakers in the darkness commanding all fans attention.  When Randy Blythe hit the first belt in the track the curtain dropped, and the lights kicked on to reveal the quartet standing among a very impressive setup. No jarring was needed for the Dallas natives to match the energy. Shoes, hats, sanity – the crowd lost it all right away keeping security very busy up front. Randy mentioned that “we should warm it up in here" as the group launched into the track “Walk With Me in Hell”. The track featured an incredible amount of pyrotechnics on every “hell” lyric. It would not be a Lamb of God show without Randy performing one of his patented riser jumps. He climbed up the massive drum riser and timed his jump perfectly to be framed by flames while high above the stage.

Through the impressive 15 track setlist fans were treated to fan favorites like “Now You’ve Got Something to Die For”, “Omerta”, “Resurrection Man”,  as well as newer tracks like “Greyscale” and of course, “Omens”. Notably Randy took a moment to dedicate the playing of the track “Ruin” to Texas’s own late Riley Gale of the band Power Trip. A somber moment but touching remembrance of a local metal legend. Randy continued to dole out praise and appreciation both to the crowd and those who helped them all along this tour. One special shoutout would be to Fit For An Autopsy vocalist Joe Badolato whom helped fill in for Randy on a sub 24 hour notice while Randy had covid on tour. Randy asked Joe to come on stage and help with the ever so popular “Laid to Rest”.

A fitting track to nearly send the night and tour out on…or so Dallas assumed. Randy dedicated the last track to Texas metal legends Vinnie Paul & Dimebag Darrell. The entire lower bowl of standing room pit broke out into a 50-foot-wide circle pit as “Redneck” rang out. An amazing ending to a legendary tour.