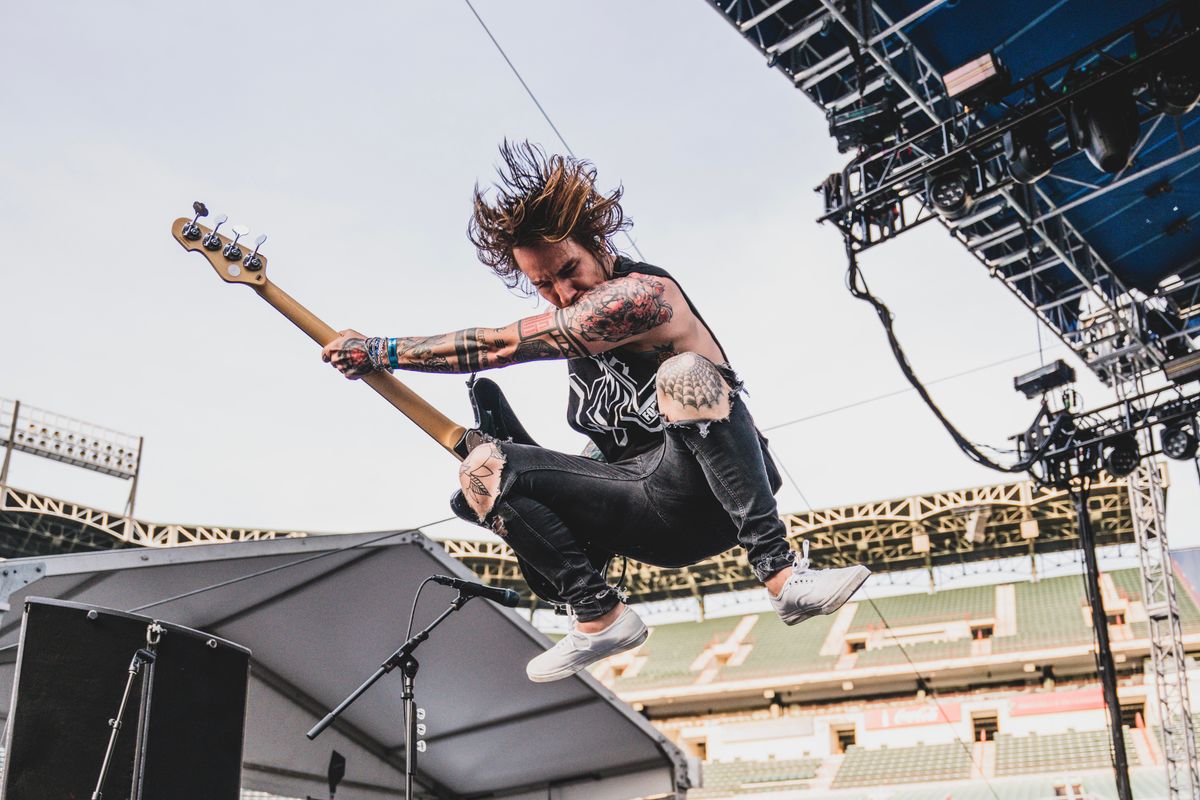 Concert Review - So What! Festival | via Hunnypot Live

Where to start… This HIGHLY anticipated festival a year in the making was finally hitting the Choctaw Stadium (formerly the Rangers Stadium) in Arlington, Texas the weekend of May 27th to the 29th. The hype around the fest was all people were talking about across socials leading up to it. The number of bands, the venue, and the different genres that would be represented in and of itself was more than enough to get people online and buying tickets to this packed 3-day lineup. Mike Zeimer and Third String Productions went above and beyond on this one and I was stoked to be a part of it capturing content every day of it. Let’s dive into day 1 and how So What! started off.

Before we jump into the artists, lets’ chat about the setup of the festival. There were two stages in the actual stadium, the Stay Lit main stage and the Revolver side stage (with more metal and post hardcore type bands). Outside the stadium, you had the Hip-Hop main stage, Flow’s Backyard, where you could watch your favorite rap and hip-hop acts. The production on that stage was phenomenally set up with a ton of LED screens and a high-rise platform. The stage was also like 10 feet tall. It was insane. Right around the corner was the 4th stage, the Hot Topic stage where you would find a lot of your pop-punk and pop bands doing their thing. I found myself at this one a ton! Around the other side of the stadium, you would find the Monster A & B stages then directly behind it, the Bowling For Soup local stage. 6 stages of pure fun to set the festival up for success.

I showed up to the stadium, got my wrist band, and headed to the press box to get things set up and ready. The high-ticket artists that I was super excited about for day one had to be Bilmuri, Rebecca Black, Wage War, I Set My Friends On Fire, and Attack Attack! These were just a few of the man artists that I wanted to see, and they all absolutely crushed it.

Let’s start with Rebecca Black because, let’s be honest, I don’t think anyone was going to miss that one. It was also FRIDAY and so you know it was about to pop off. To all our surprise, she was a fantastic performer. She had some catchy songs and I think many were captivated by the sheer talent she was exuding on stage. She ended her set with "Friday" and the crowd literally had no idea how to deal. It was incredible.

Another one I want to highlight that put on a fantastic set was Bilmuri. I’ve been a fan of Johnny Franck and Bilmuri for years now. This was going to be the second time seeing them and they probably had the best set of the day in my opinion. Their stage presence was a vibe and it looked like they were having an absolute blast with each other. Something I thought was a very memorable moment as the doing an encore as the headliner and Johnny getting off stage to go to the crowd and sing with them. It was a wholesome moment and I think it sealed the day for me.

Day two was up next and at this point I had found my flow for how to navigate the stages and the fest overall. Artists I was looking forward to seeing were Sum-41, Grandson, and Rae Sremmurd. Sum-41 being a band that I have seen and shot multiple times before, I was ready for another round with them. They bring a type of energy to the stage that takes me back to feeling the nostalgia of discovering them. Deryck Whibley has been doing the damn thing for such a long time and it’s like performing is second nature. They played all the hits the fans wanted to hear, and the crowd was packed the whole time. Sum-41 will always be a band that I try to see when they come to town because they are one of the few that still do it right from that era of punk rock.

Grandson was another artist that I was excited to see again since Unsilent Night in December. He is one of my favorite people to watch on stage because he turns into a whole other person. He jumps around like crazy, and it makes for a ton of awesome photos. My favorite song of the whole set was “Blood // Water”. Grandson makes sure to let you know he means business on stage. He stands for some awesome things as well, and I can’t wait for him to roll back through Dallas.

I was finally finding myself at the hip-hop stage and it was for the one and only Rae Sremmurd. Swae Leecame out and rocked it. This was one of the first rap sets I had ever seen and it was interesting. They do like a solid 10 minutes of getting the crowd hyped up for the artist to come out on stage. Rae came out and captivated the whole crowd with his music. I liked the different angles I was able to capture because the lighting was intensely bright. It was cool getting to take photos of my first rap artist!

Day three was upon us and we were not letting up until the final act. 3 big ones of the day for me were Blackbear, Underoath, and Alexisonfire. I think day three was the best one of them all in my opinion. Very stacked lineups and the closers were incredible.

Blackbear was first for me and one that I was extremely excited about given in the last 2 years he has been one of my favorite artists. The sad thing was they didn’t want any photographers in the pit, so I did what I needed to do and slowly made my way to the front of the crowd. I was able to get there with just 2 people between me and the barricade. We were off to the races. Every song, blackbear crushed it. I was feeling the singing from everyone around me. He literally stole the show. It was incredible 10/10.

Underoath was also one of those bands I had not seen live given they were on a hiatus for so long. I couldn’t wait to watch them tear up the Stay Lit main stage with every song. I was not let down. Each song they pile drove the riffs at us and his vocals came out so clean in the monitors. It was definitely a “you had to be there type of moment”. I think I got some of my favorite photos from their set.

Alexisonfire came out swinging and did not let up. I was particularly excited about their set because Dallas Green (City and Colour) is one of my favorite singers. It was dope to see him in this type of setting, with this band doing the damn thing. I think they exceeded the expectations of the fans. It was super sweet to see so many people singing their songs after them being gone for so long. An incredible time watching them go crazy on stage. I CANNOT wait to see them again.

And there you have it. So What! Fest came to a close Sunday night, and it was everything I could have ever asked for in a large-scale festival environment. It was hot but there were amenities at every corner. Shoutout to the Third String Team for creating a rocking weekend and for having me out. See you next year!