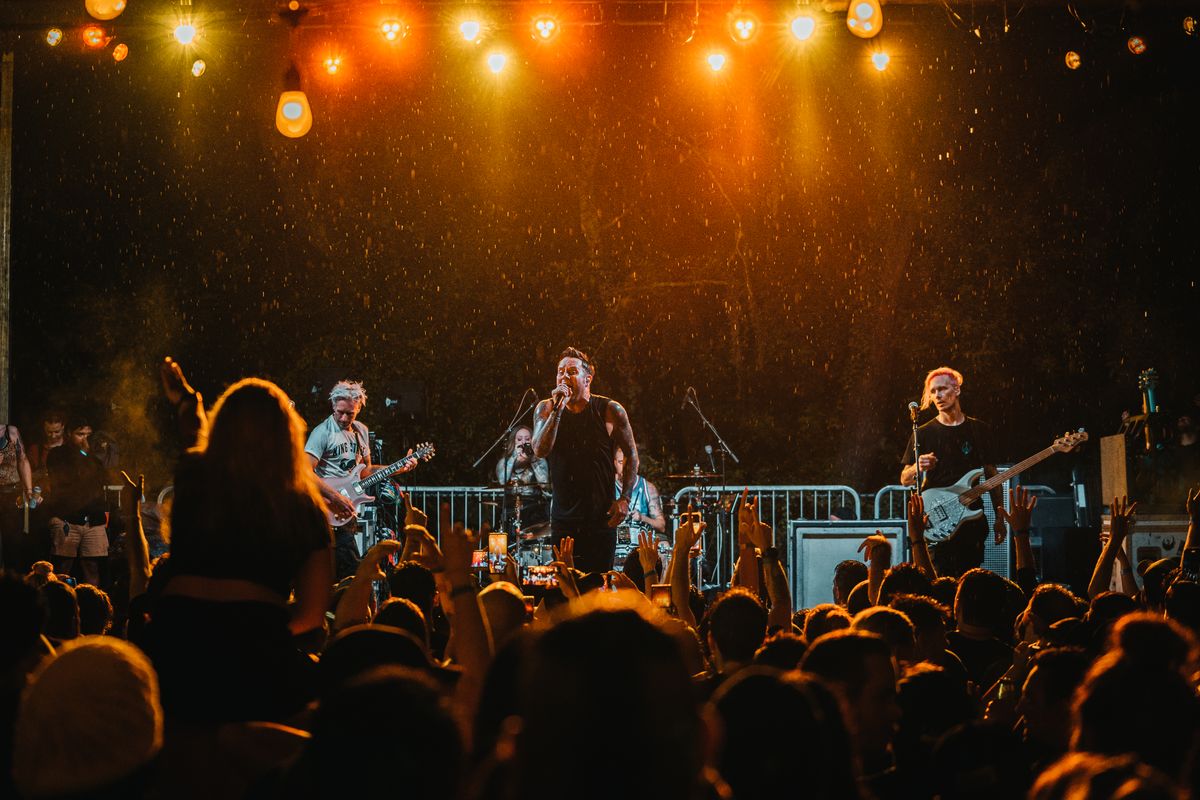 Concert Review - Story of the Year @ The Orpheum | Tampa, FL

A sign at the entrance to the full parking lot says “Drop-off only”. I guess that explains the steady stream of black skinny jeans, Vans, and Warped Tour tees making their way from the Walmart parking lot a few blocks away. As if by some miracle though, the dark skies opened up and a heavenly beam of light shined on the parking attendant who moves some cones, waves us in, and directs us to a spot right next to the tour busses. I hadn’t seen many photos of The Orpheum's new venue and I was excited to get inside to see their new stage setup.

Ryan Phillips, Story of the Year lead guitar, pops his head out of the tour bus for a moment and I’m instantly transported back to 2006 when I last saw them on the In the Wake of Determination Tour. Fourteen year-old me had Ryan autograph my forehead. That wasn’t my smartest memorabilia investment. Although I’m quickly snapped out of this memory as I look past the tour bus and see a large outdoor stage. This is an outdoor show? No one said this was an outdoor show. It’s been monsooning all day with no sign of stopping, and I have no rain gear for my camera - but this is Story of the Year and nothing short of a hurricane is going to keep me from getting the shots.

I step into the venue just as Escape the Fate is kicking off the night. Playing a heavy hitting 30-minute set, they wasted no time or energy. The crowd didn’t need a warm up either, a circle pit emerging right away, and fans of all ages singing along to every chorus. The set closes out with a wall of death during This War Is Ours and the crowd chanting along to One For The Money.

Sending another wave of early 2000’s nostalgia through my veins, Hawthorne Heights opens up with Pens and Needles to a crowd that knows every word. The rain doesn’t slow for the entire set, but Floridians are used to it and it’s only adding to the wave of emotions we all feel when the first notes of Ohio is for Lovers come through the speakers as they close out their set.

Story of the Year emerges a short time later to a roar of applause from the sold out venue. Feedback rings through the speakers, and any Story of the Year fan knows that sound means we’re jumping right into a circle-pit-worthy intro to And The Hero Will Drown. The crowd fed off their energy, and despite vocalist Dan Marsala injuring his foot only a couple shows into the tour, he didn’t let us see any lack of enthusiasm. Even interacting with a young fan on the barricade.

As the rain starts to pick up and the beautiful waterfall forming off of the stage roof into the photo pit starts to get heavier, I head to the back of the venue to do a little welfare check on my camera gear. The back of the venue is usually a good place for this. A place where you might find those less rowdy, or less interested in the show. Nope, not this show. Everyone in every corner of the venue is singing along to Anthem Of Our Dying Day. Inspecting my gear, a group to my left is standing in a circle belting the chorus into eachothers faces. To my right I overhear a woman excitedly turn to her partner and say “Oh I know this one!”

This tour is a special one because we get a live debut of a brand new song under their new label SharpTone Records. The song Real Life, released just a few days before the show, highlights classic SOTY sounds. The ear worm of a song draws you in with punchy instrumentals and lyrics that we can all find meaning in. Despite only being a few days old, the crowd knew almost every word. This shocks Dan as he thanks the crowd for being the first fans to sing along.

As with any Story of the Year show, we get typical antics from the guys. Jokes about boners and banter about Jameson. Bassist Adam Russel jumps across the venue to the bar while they play an Emo Medley consisting of Yellowcard, Taking Back Sunday, and My Chemical Romance. “I’m Not Okay” really wouldn’t be the same without Adam kneeling for a shot of Jamo with the fans.

The night closes out with a powerful Until The Day I Die. The crowd, now drenched and disheveled, dramatically spill their hearts for the band for one last song. At this point I realize that I don’t even need to review the show as much as let you all know that Story of the Year still has it. If you have the opportunity to see Story of the Year on any of their next tour dates, jump on it before they sell out. And if you can’t make it, I’d say based on their new single that I think we’ll be seeing a lot more of them in the near future!