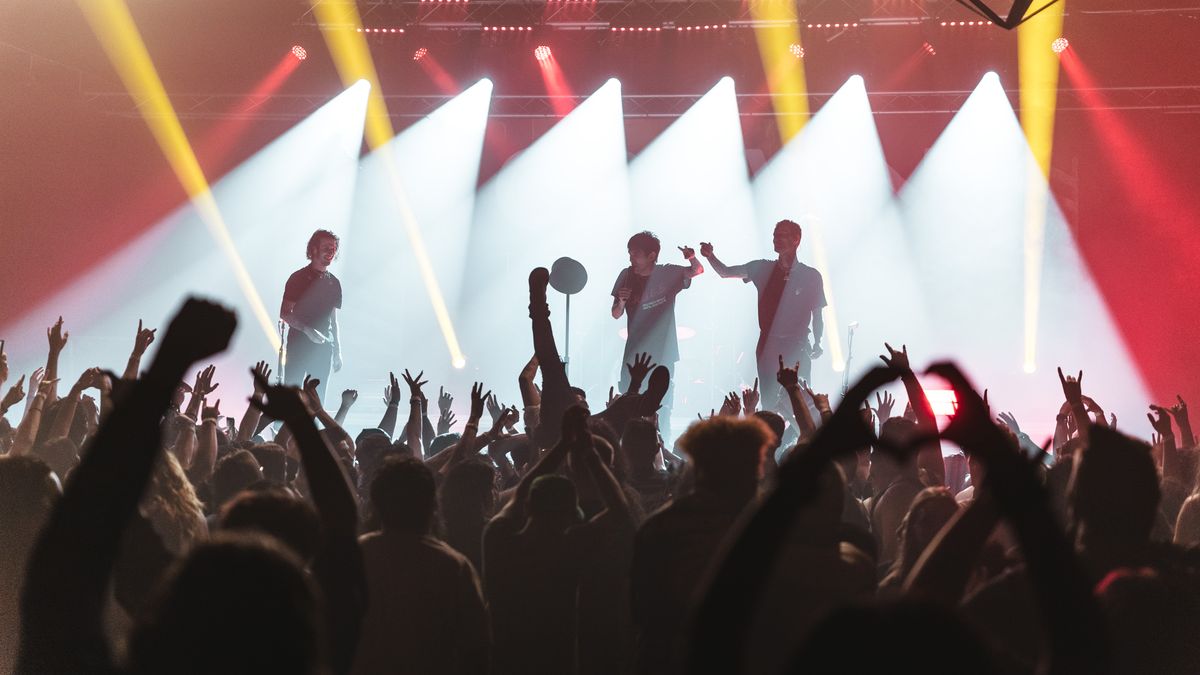 Crown The Empire returns to their hometown with friends and throws a raging show, worth more than admission.

As I walked into South Side Music Hall, ready to get to work, I happened to catch the tail end of the VIP meet & greet with Crown The Empire. Their energy with fans was infectious and I knew this show was going to be fun. Sound checks blasted in, and we were off to the races.

Up first the New York native quartet Until I Wake. Since their debut in 2020 these guys have been on my radar which made me super stoked to see them live. They did not disappoint at all. Cody Johnson held down the show front and center with amazing front man leads. Guitarist August Lee Geitner, bassist Ryan Ridley, and drum kit smasher Alex Curtain played out of their skulls. Everybody in the building was jumping when the band played their most popular track Self Medicated. These guys flat out kick ass – plain and simple. I cannot wait to see what more they have coming in the near future.

Before I knew it, the lights went low, and The Word Alive took the stage. Being an “elder emo”, I have jammed these tracks for many years, but this was the first time I had the chance to see them live. Lead vocalist Tyler ‘Telle’ Smith and crew did not hold back. Hiram Hernandez on bass with Tyler William Ross on guitar carried the tone while Daniel Nelson marched the venue along with his drums. Telle is an absolute masterful front man in both presence and his vocal range. One of my favorite moments of the whole evening was standing in front of the circle pit during the track Trapped. If you have not heard of these guys by now you are missing out.

Third up we were treated to Destroy Rebuild Until God Shows (abbreviated D.R.U.G.S.). These guys have been back together for 2 years now, and I could not have been happier to see it live. Lead singer Craig Owens is largely responsible for my love of the scene since his work with previous band Chiodos. Craig and cast of Aaron Stechauner on drums, Jona Weinhofen on guitar, and Aaron Patrick on bass, absolutely rocked the house. From Aaron's blasting of the kit in the track Satellites In Motion, to the stringed duo lighting it up in DESTINY there was something to love for everyone. Craig played up some crowd interaction for the intro to track Outcasts VS Everyone which was awesome to witness. Telle joined in singing with Craig making for some of my favorite pictures of the night. Front to back this was an amazing set.

Last but certainly not least, the reason for the night – Crown The Empire. The Dallas natives returned home on the second to last stop for the tour and left it all on the stage. Front man Andy Leo’s came out with the most infectious energy the night had seen yet. The crowd was absolutely primed for the best act yet. Right out of the gate the group played the title track for the anniversary album The Fallout. With the tone set bodies started flying in body surfing and not a single person was left standing still. Brandon Hoover absolutely shredded every track on his LTD while Hayden Tree carried the wicked baseline all night. I absolutely loved that Drummer Jeeves Avalos was elevated and more visible to the venue for everyone to truly appreciate his work behind the kit. You would never know Jeeves had joined the band just this year for how much he killed every single track.

In between tracks Andy lamented on the gravity of the situation saying: “It’s so rare for a band to make it 10 years… this is so cool.” Fans ordered shots and brought them up to the group much to their enjoyment. At one point Andy asked the lighting crew to make use of the huge disco ball located in the center of the ceiling which had been dormant all night. After some crowd jeering the ball and lights spun to life and the band played BLURRY (out of place) – what an amazing moment. Immediately after Hayden demanded, the pit dwellers run to start a circle pit around the sound booth near the back of the venue – which 60 or so concert goers happily obliged to. I have seen less impressive pits at shows with “heavier” bands. Seriously it was wild how hard these fans went.

Craig came out and sang with Andy as the night reached its end. The track Machines is my absolute favorite from them and a perfect way for them to send us off into the Dallas night: happy, sweaty, and tired. From cellphone light waving and a disco ball to crowd surfing and insane circle pits – this concert had it all.