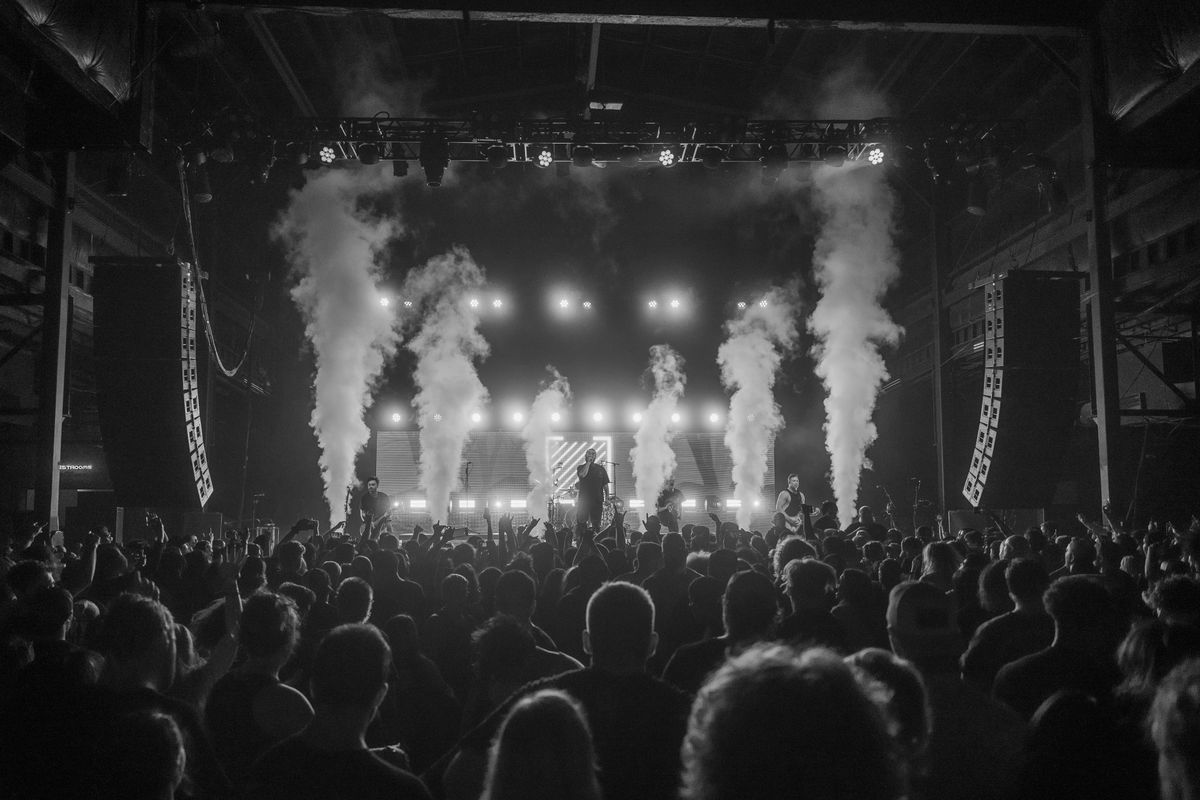 I Prevail & friends bring the heat to a sold out Dallas crowd everyone is sure to remember.

Yours Truly was the opener for the evening. While I had never heard this Australian pop group, it didn’t take long into their set for me to start jamming along. Frontwoman Mikaila Delgado has a super infectious smile and stage presence. Bouncing from one stage riser to the next, she made sure to get all segments of the opening crowd a great view. Guitarist Teddie Winder-Haron provided some kick ass riffage and a sweet high riser jump. The groups punchy tracks remind me a little of Avril Lavine and Paramore. While I don’t like one to one comparisons like this I think that its an applicable compliment of what this group is able to do. I really enjoyed this set. They closed out their short set with my favorite track yet – ‘High Hopes’. Check out a few of my shots of them below.

Next up the hometown heroes of Fit For A King. I had very much looked forward to this set as I have covered Fit For A King before. Right off the jump frontman Ryan Kirby greeted the hometown crowd and let them know how happy he was to not only be home but to be playing in front of his wife and son. The group then launched into the track ‘Reaper’ which features Ryan's insanely long twenty something second scream at the end. Absolutely sick to hear live.  Bassist Ryan ‘Tuck’ O’Leary is always a sight to behold with his bass spins and high jumps. Of course, I was pumped to hear the two new singles ‘End ( The Other Side )’ and ‘Falling Through the Sky’ which are new favorites of mine. Drummer Trey Celaya was sick to watch as his kit skills never fail to impress. Guitarist Daniel Gailey ripped through the whole set had a very sick solo center stage during ‘When Everything Means Nothing’. At one point Daniel made his way beyond the barricade to play while standing on top of willing patrons’ hands. I absolutely love this group and can’t wait for the new album.

The time of the night had come for Peirce The Veil. In their long hiatus away from touring and new music the fandom anticipation was through the roof. Southside was filled wall to wall with eager fans awaiting the groups return to the stage. The resurgence of the track ‘King for a Day’ into the Billboard charts thanks to a TikTok trend no doubt had a part to play in the packed house. Even before they took the stage it was cool to see just how many people from all age ranges were in attendance. The lights went low and the intro for ‘May These Noises Startle You in Your Sleep Tonight’ into ‘Hell Above’ rang through and the crowd went ballistic. I was very thankful to be wearing earplugs as the crowd behind the photo pit rivaled the riffs coming through the speakers. Crowd surfing commenced almost immediately and never let up. Frontman Vic Fuentes has not lost an ounce of tone over the years and carried each track with ease. Tony Perry and Jaime Preciado had some of the highest energy of the night by far bouncing off risers and interacting with the crowd at every turn. Getting to experience ‘Bulls In The Bronx’ in my thirties was a great time. From ‘elder emos’ to ‘zoomers’, the whole venue was united in jamming to these tracks. From ‘Caraphernelia’ to ‘Texas Is Forever’ the band pulled out great select classic jams. The venue erupted when the group capped their set with the long awaited ‘King for A Day’ which was a perfect ending to their return to Dallas.

After a small change over delay, the reason for the night took the stage – I Prevail. The lights pulsed in time with the intro to ‘0:00’ marking the bands entrance. The giant led screen behind drummer Gabe Helguera as the band took the stage to thunderous cheers. The mix of Brian Burkheiser’s cleans with Eric Vanlerberghe’s screams are some of the best to do it live - I am hard pressed to think of a better duo. The two don’t stop at being just a vocal tandem, they are also incredible performers together. From screaming/singing together face to face to playing off the others stage location to say these two are in sync would be underselling it. The talent doesn’t stop at the two front-men either. Gabe was an absolute blast to watch as he kept the percussion at a breakneck pace all night. The sheer amount of stamina needed to not only play a 17 track set list but kill it on drums is nothing short of admirable. Gabe also took a break from his kit to join the two front-men for a piano interlude that cooled the room in an amazing way. Steve Menoian on lead guitar smashed each riff with ease while also engaging with the raging crowd. Dylan Bowman is no slouch either -providing the needed rhythm guitar while also dishing out some awesome backup vocals.

The lighting package as well as the smoke cannons and general production of this tour made me feel very spoiled to witness live. This is not your run of the mill show – hats off to all the crew and design that went into this show. Seriously I want to re-iterate how killer production is.

But what about the tracks!? With this being the True Power tour, we were treated to album set list in nearly its entirety. Brian took time to preface the track ‘Breaking Down’ by speaking about mental health and reminding people to reach out to friends and family just to offer an ear to listen or shoulder to cry on. A very powerful moment that clearly resonated with the entire room as they launched into the chorus “I think I’m breaking down!”. The track ‘Paranoid’ is an absolute vibe live with the amazing pop like interludes and slow build up by Eric’s screams. The pit was consistent and wild all night however when the group played ‘Gasoline’ things kicked into overdrive. Brian’s 'Chester Bennington' like spoken word built the anticipation to insane heights as the room visibly raged. The night would not have been complete without you guess it – ‘Bow Down’. Everyone in the room had waited for this moment all night and let me tell you, it was well worth the wait. Dallas was tired and sweaty but gave this track everything they had left. What an amazing way to cap the night.