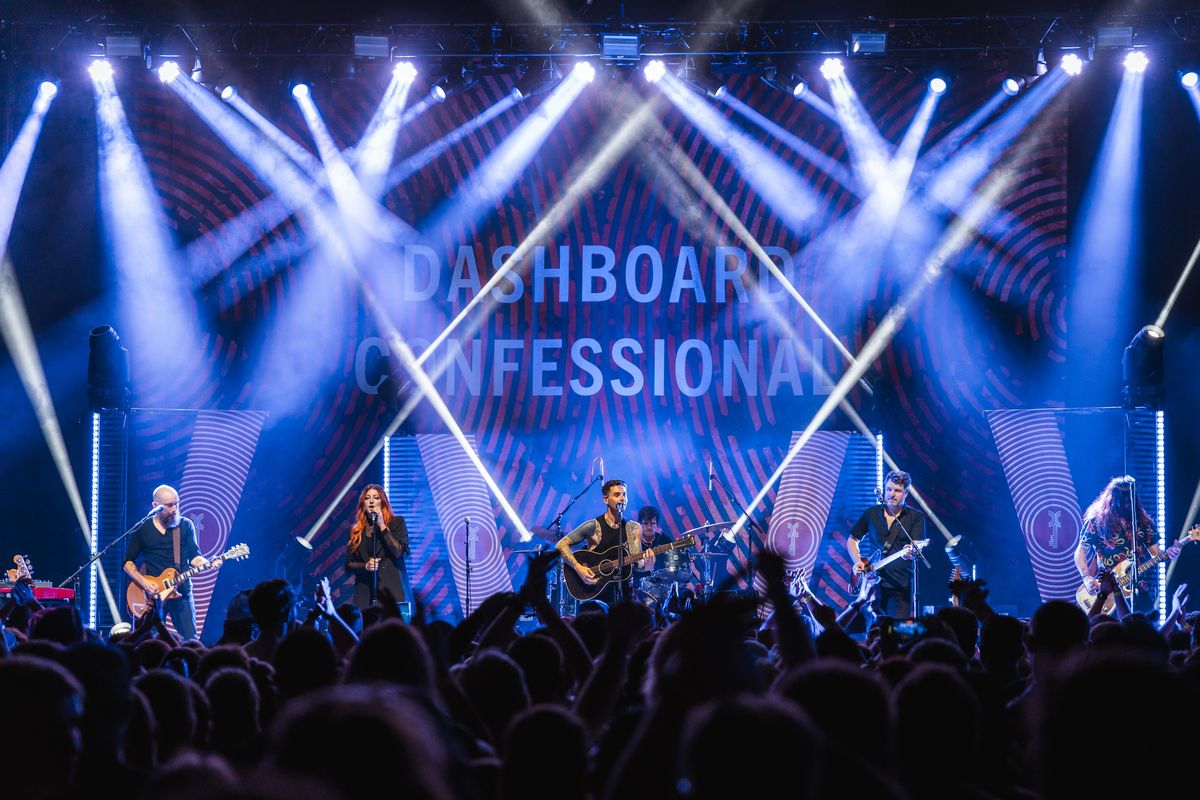 I do not know that I could think of a better early 2000’s blast from the past lineup than that of the Hello Gone Days Tour. A co headline smash hit with Dashboard Confessional & Andrew McMahon in the Wilderness (former front man of the legendary Jacks Mannequin) and finally the return of Cartel! I never had the pleasure of catching any of these acts live previously so excitement was high. Media pass in hand, camera ready, room filled with anxious nostalgia seekers – its go time.

First up, the long-awaited return of the Atlanta natives – Cartel. The guys wasted zero time in getting the crowd re-acquainted by playing fan favorite ‘Honestly’ right out of the gate. It was hard not to bob my head along while navigating the photo pit. Will Pugh’s vocals sounded as good live that night as he did in 2005. I really enjoyed watching Joseph Pepper’s stage presence, he had everyone engaged, bouncing, and loving the moment. The room lit up for ‘The Perfect Mistake’, ‘The Fortunate’. Closing out their set with ‘Burn This City’ as the perfect primer to the night. It was so awesome to get to see their return to center stage.

It was not long before Andrew McMahon in the Wilderness took the stage. Sporting a big supporting cast of talented musicians and an awesome piano covered in stickers from presumably all over the world. Andrew welcomed the packed room by keying in the very popular Jacks Mannequin track ‘Bruised’. Andrew’s energy is absolutely infections and a sight to behold as he played his piano while managing to move the entire room. So many amazing tracks played both newer original and Jacks Mannequin covers including ‘Holiday From Real’ and ‘The Mixed Tape’. When playing the track ‘Island Radio’ Andrew took to crowd surfing on an inflatable duck as seen below – so cool. My favorite moment of the set was watching the named banner drop to reveal a star studded led wall as the band played the track ‘Stars’. Saving all the anticipation for the end they played ‘Dark Blue’, which had the entire crowd swaying and singing along. I walked away from this set absolutely enthralled by pure musicianship I had witnessed from the group.

Lastly, Dashboard Confessional came on to play out the end of the night in the best way. I have never had the pleasure of seeing Christopher Carrabba in person, but I would be lying to you if I said I was not excited. Playing us in with ‘The Brilliant Dance’ acoustically was the perfect re-introduction to his iconic vocals. Watching the cast play around Chris’s energy was awesome to watch. I really cannot iterate enough how good these supporting band members are between both acts. Chris stopped took time between tracks to mention the passing of time over the years and how cool it has been to see not only his generation show up to these concerts but also their kids. One sign held up by a younger person said ‘Burning Heart’ was their favorite track – Chris smiled and was happy to oblige when the time came. It would not have been a complete night without getting ‘Stolen’. You could hear the whole venue singing along to the chorus “you have stolen my heart”, myself included. Saving the best for last we were treated to 'Vindicated’ and ‘Hands Down’ to close out the night.

While I had not seen any of these acts live prior to tonight I left enchanted by the show. Many tracks have been replayed since. If you have a chance to catch the Hello Gone Days Tour before it wraps – DO IT!